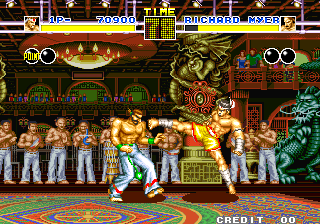 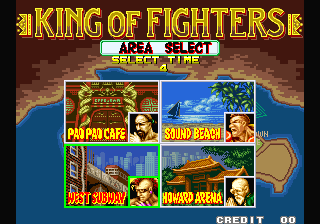 Terry Bogard & Andy Bogard enter in a tournament called the King of Fighters where they must face dangerous fighters in order to find their father's murderer, none other than the tournament's sponsor & supreme champion: Geese Howard. Joe Higashi also enters the tournament in search of the championship title. Who will come out victorious? The main features in this story-driven fighter are backgrounds that feature two battle planes for pseudo 3-D action, & excellent music!

TRIVIA
Garou Densetsu was released in November 1991 in Japan.

The title of this game translates from Japanese as 'Legend of Hungry Wolf - Battle of Destiny'.

This game is known outside Japan as 'Fatal Fury - King of Fighters'.

Originally called 'Real Bout', SNK opted to change the title to 'Fatal Fury'. You can see the game's original title on the banner of a store in the background of Hwa Jai's stage ('Real Bout Shop').

TIPS AND TRICKS
As the game sometimes says on the continuation screen, you can tell some opponents' weak points by watching their moves carefully, which can help you figure out how to beat them. Here are a few examples:

-- If you've knocked down an opponent, you can damage them some more by charging at them with a 'dash attack' just as they're getting up, until they've been fully beaten. This may work best when playing with Andy Bogard.

-- When Tung Fu Rue changes into a hefty beast Incredible Hulk-style, he'll be briefly intangible as he beats his chest. Wait until the right moment and then dash at him (or, if you're playing with Joe Higashi, you can use his rapid punch). He won't actually fall on the ground in this form, but he'll be easier to beat until he turns back to normal as long as you can keep dash-attacking him.

-- When you're facing Hwa Jai, he'll be thrown a bottle of some kind of drink by an agent of Geese standing within the crowd of spectators, and after drinking it (during which time he'll be briefly intangible too), that's when he really lets loose with damaging attacks. If you feel Hwa Jai's too hard to deal with this way, you can try to cause him damage by a small amount, and if your lifebar is still higher than his, you can then step back on defense. He'll try hitting you with standard punches and kicks, but will not throw you, and this way, you can keep on the defensive until the timer runs out, winning simply by having more life energy left than he does.

-- When facing Billy Kane, if his pole falls away (he can either throw it at you or it can fall when he's thrown to the ground), he'll go on the defensive until another agent of Geese's tosses him another pole from within the crowd on the bridge. When he jumps up to grab hold of it, that's when you can move in and try to grab and throw him to the ground, or ram him with a dash attack.

Finally, when facing Geese Howard in the showdown match, you can move towards him as the round begins and then grab and throw him to the ground, then, by timing your attacks correctly, you can grab him in a body slam again when he gets up, eventually beating him by body-slamming him repeatedly. It's a tricky strategy, but it can work!