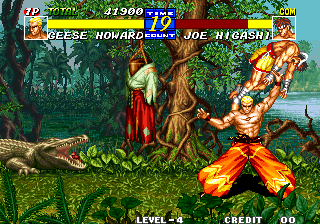 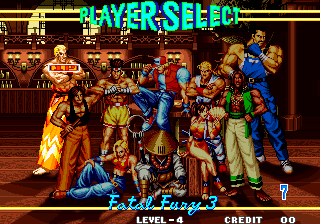 During a trip to Southtown to attend the inauguration of a new branch of Pao Pao Cafe by former street fighter Richard Meyer, the lone wolves (Terry Bogard, Andy Bogard, Joe Higashi & Mai Shiranui) are unwillingly caught in the middle of a desperate search for the Shiranui Scrolls and the mysterious fighters that are after them! The game features a new graphic style, 2 different background planes to fight, a grade system that shows how well you perform in battle, lots of hidden moves & combos, as well as multiple endings based on your performance. The answers shall only be uncovered by a long & fierce battle, are you up to it?

TRIVIA
Garou Densetsu 3 was released in March 1995 in Japan.

The title of this game translates from Japanese as 'Legend of Hungry Wolf 3 - The Distant Battle'.

Garou Densetsu 3 overtly refers to itself by its overseas name of 'Fatal Fury 3' throughout the game.

This game is known outside Japan as 'Fatal Fury 3 - Road to the Final Victory'.

Things that changed in this particular game:

TIPS AND TRICKS
Reach and beat Jin Chonshu with a fighting grade above "A" and you'll fight a hidden last boss, her brother, Jin Chonrei.

One of the coolest things of this game is the fact that you can alter some backgrounds objects by slamming opponents against them. For example, you can knock away the training dummy in Joe's stage if you send an opponent flying towards it. Experiment on various stages to find more surprises!